Susannah Charleston will be talking about Possibility Dogs 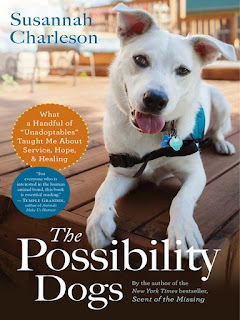 One Book, One Community – Read. Reflect. Engage.  is a campus-wide initiative that seeks to engage students, faculty, staff, and the community in reading, discussing, and analyzing the same book. This semester the One Book One Community Committee has chosen The Possibility Dogs by Susannah Charleston. Copies of the book are available in the YCCC Library. Please join us for either of these two events, which are free and open to the public.
YCCC has two free events planned and hopes that faculty, staff, students and members of the community will join us.
March 8, 2017 – Noon
Susannah Charleston, author of The Possibility Dogs will be on campus for a discussion of the book, working with dogs and therapy animals.
ABOUT the AUTHOR:
Susannah Charleson was first published under her given name in 1981. A content provider before the term became an idiom, she has written magazine and newsletter articles, multimedia productions, PSAs, news stories, commercials, features and movie reviews for commercial radio, Web content for publisher Thomson/Wadsworth, radio theatre and parody for public radio, catalogue copy for a vintage jewelry store, and serial fiction on AOL. In addition to writing for media, she has worked in radio and television reporting news, weather, and traffic. Susannah hosted a Dallas-area arts & entertainment television program for thirteen years.
She is a flight instructor and canine search-and-rescue team member in the United States. Her search partner Puzzle is a Golden Retriever certified for the rescue or recovery of missing persons in urban, wilderness, disaster, and scent discrimination/trailing searches. Susannah and Puzzle share their home with a rabble of Pomeranians, a rescued German shepherd-Labrador retriever-pit bull mix, and a rescued Skye terrier-chihuahua mix out of Hollywood.
Susannah’s first book, Scent of the Missing: Love and Partnership with a Search and Rescue Dog, was published by Houghton Mifflin Harcourt in April 2010. This critically well-received book also appeared on the New York Times, Dallas Morning News, Amazon and Denver Post Bestseller lists, with excerpts appearing in D Magazine, Bark, and other online venues. The e-book returned to Wall Street Journal and Amazon bestseller lists in fall, 2012. Scent of the Missing is available in audio formats from Blackstone Audio and in e-print for Kindle, iPad, etc., as well. Portugese, Polish, Czechoslovakian, Japanese and Chinese editions are also available now.
For more information on the book, including a video trailer with Puzzle working in the field, visit the Scent of the Missing website. Scent is available through Barnes & Noble, Amazon, and fine independent booksellers nationwide and may be ordered directly from the book’s website, online, or purchased in stores.
Scent of the Missing was optioned for television in 2010 and is owned by CBS Productions.
A book that follows Susannah’s work with rescued dogs trained for mental health service to the disabled and for therapy work in the wake of catastrophe or trauma — The Possibility Dogs: What a Handful of Rescues Taught Me About Service, Hope, & Healing, Houghton Mifflin Harcourt, June 2013.
Audiobook editions of both Scent of the Missing and The Possibility Dogs are available from Blackstone Audio/Downpour.com. Susannah narrates both books.

And last but not least, Patricia McConnell!

The Education of Will

Patricia will be talking about her memoir, The Education of Will: A Mutual Memoir of a Woman and a Dog. The "Will" in the title of Patricia's new memoir has two meanings. First, it refers to her Border Collie, Willie, who came as a "troubled, spark of a dog," who was loving and attentive, but also consumed by fear. However, the word "will" also refers to will power, which, as the book shows, is not enough to help a panicked dog, much less a dog owner overwhelmed with her own fears. Patricia will touch on her very personal story about how her beloved Willie first set her back, but eventually led to healing from the traumas in her own past that she had tried to "will" away for decades.
Join Patricia as she details her personal journey with Willie to turn a life of fear into one of confidence and compassion.
Registration information coming soon.
Posted by gooddogz at 3:12 AM No comments:

gooddogz
Me- Nancy Freedman-Smith CBATI, certified pet dog trainer for nearly 20 years, and owner of Gooddogz Training Portland Maine. After successfully blogging on Maine Pets since 2005, I have finally branched off to my own personal blog where you will find not only positive training tips, canine-activities and places to visit along with the latest information on keeping your dog healthy and active, but anything else that suits my fancy. I share my life with my 3 kids, and my two dogs. Find my writings on Petcha.com www.gooddogztraining.com